Typically the manual process for placing an anchored graphic above line, can be outlined as follows: 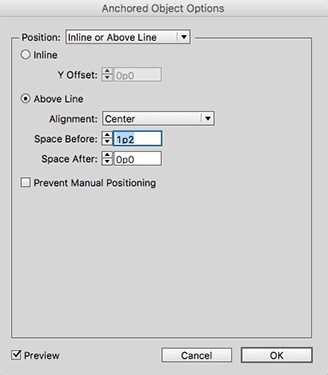 That’s seven steps to place one graphic (which is OK if you have only one or two). For more images, you may consider automating the process. 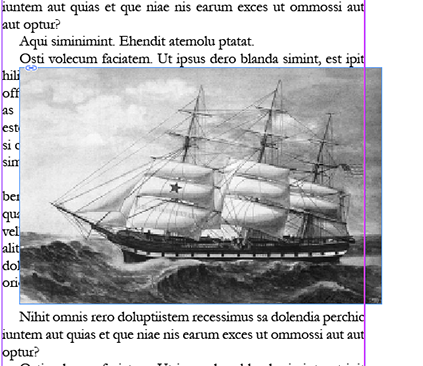 It is well to note that an inline graphic is considered by InDesign to be a single character. When the graphic is placed it is styled the same as the paragraph to which it is attached.

In addition to settings in the Anchored Object Options dialog, placement can be modified using character and paragraph styling.

For a complete set of properties that you can assign to your anchored object, including its placement, consider using an object style.

Create an object style for your project (see settings above). Name it AnchoredGraphic or whatever you prefer.

With the object style created, you can replace steps 5 through 7 above with the following:

If you have a boat load of images to place, you may consider the few minutes it takes to create a script to execute all of the steps (but the first) above.
Below is a script for starters.

The script does expect that you will have a document open with an insertion point selected in front of the paragraph where the image will be placed.

Notice that each major process for the script is taken care of (handled) in a subroutine that begins with the word on and ends with end. Values, as needed, are passed to the arguments list (inside the parentheses pair) as part of the on statement. Statements that call the handlers are placed inside a try/end try statement block that takes care of any errors generated in the handlers.

To take care of specific problems you may face in your workflow you can add to the scriptt
If your documents might not have the object style specified, you could have your script test and create the style if needed.

Additionally, your users may have failed to follow instructions and have files other than images in the Images folder. You could prevent the script from trying to place an improper file by making the following changes to the getImage() handler:

Also,notice that getImage() calls another handler that uses the system to test for file type and file name extension.

If you need to add a caption to the graphic, here are two options:

Should you have the occasional graphic that needs to be have alignment other than that set for the object style, you can always override the alignment setting for your object style in InDesign’s Anchored Object Options panel (Object > Anchored Object > Options). And, for the graphic that ends up at the top of the page, you can similarly override the space above setting.

If the workload merits the extra effort (will take less than five minutes), save the image in the User section of InDesign’s script panel and assign a keyboard shortcut to the script.