In our previous post we introduced readers to a script that would automate placing a script template into this protected folder on the Macintosh. The folder is located inside the application support folder for the computer administrator (Library:Application Support:Script Editor:Templates:).

Our script assumed the existence of a sub-folder named “InDesign Templates” at this location. To make the script more robust, the following version checks to see if the folder exists and, if not, creates the folder.

In the event you would have more than one folder for your scripts, you could make the script more flexible by having the user choose the appropriate folder for placing the template. This version gives the user the option of choosing a folder that exists or creating a new folder.

Script templates are more often used for general or more complex scripts. On the other hand, many scripts that you write will be constructed by using a series of handlers: code that lends itself to reuse under a host of different conditions. For instance, the Save To Favorite script developed in the previous blog would benefit by adding code to determine if a document is open in InDesign. It also needs to check to make sure that InDesign is running in a non-modal state (does not have a modal dialog window open). This can be accomplished by the following getDocRef handler:

Checking for the application’s modal state and the existence of a document is one of the first things a script might do. For this we have included a try/on error statement block with the call to the handler. The handler also includes a HANDLERS divider to help organize the script.

As with script templates, it is a good idea to build a library of script handlers that are readily available for your use when you start writing scripts. Macintosh provides the user with another convenience, the AppleScript Editor’s Script Folder. You can see the folders in this location using the following script:

Access to this folder (and the script snippets provided by Apple) is now controlled, since OS X 10.6, as part of AppleScript Editor’s preferences. In the General panel that opens from the AppleScript Editor’s Application > Preferences menu item, make sure Show Script menu in menu bar is checked. The Show Computer scripts is optional but I suggest checking this option. Checking Show Script menu in menu bar places a script icon (Script Menu) in the computer’s top menu bar. When clicked, it opens to reveal a menu of script automation locations. (For the Script Menu, previous versions of the OS required using an AppleScript utility.) 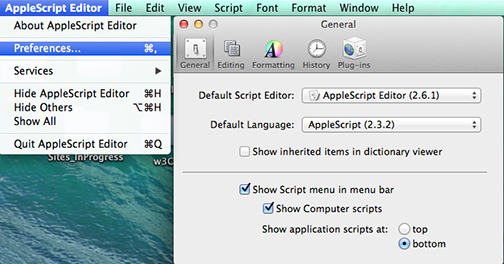 The Script Menu is a system-wide menu that serves as an invaluable tool for people who love to save time and energy with scripts. It provides quick access to favorite scripts and automation tools stored and displayed in an organized file listing. It can save and execute files saved in any of the following formats:

At the top of the Script Menu listing, the Open Scripts Folder menu item allows access to three folders you may want to take advantage of: 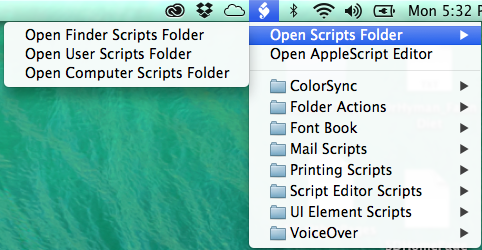 You will want to add your own library of handlers to folders inside the Script Menu. To start, add a folder named “Adobe CC Handlers” to Script Editor’s script folder. You can do this by clicking on Open Computer Scripts Folder from Script Menu > Open Scripts Folder. From there you can add a folder as you would in any Finder list. Alternatively you can use the following handy script:

Once this folder is created, decide on the classifications of script handlers that you will want in your Handler Library. As a suggestion the following list is provided: set folderList to {“Documents”, “Find-Change”, “Interactive”, “Library”, “Master”, “Page”, “Page-Item”, “Place”, “Selection”, “Styles”, “Tables”, “Text”, “Transform”, “XML”}

Place your list of folder names to the top of the “Handler Library” script above.

Just before the end tell statement, add the following:

Because this little script runs so fantastically fast, you will want to put a little alert at the bottom of the script:

Make sure that speech is enabled on your computer with the volume set to a comfortable level. Now compile the script and run. When you hear “files done” you can verify your folders are created by opening the script menu from the top menu bar.

The neat thing about having handlers in Script Editor’s Scripts folder is that when you are working with AppleScript Editor, all you need do to add a handler to a script is to hold down the Control key and click inside of your script. Select the handler you want from the menu that pops up. To see how this works, walk through the following tutorial.

Notice the beginning and ending quotes that surround –Place Script here. Library handlers are designed to work with Script Editor only. The method used above for providing these handlers to Script Editor is simplified from sample code provided by Apple. As with other sample scripts, use at your own risk.

Now that you have the handler created and saved on the desktop, you can add it to the appropriate folder in your Handler Library (in AppleScript’s scripts folder). Hopefully you have created a folder named “Documents” in the scripts folder as the getDocRef handler would be a perfect candidate for this classification.

Alternatively, you can use the following script to move the handler file to the appropriate folder in your Handler library.

Copy the following script to a new AppleScript Editor file:

Compile the script. Save it to the Desktop as “File InDesign Handler.scpt”

When you run the script, choose your getDocRef.scpt file when prompted to “Choose handler script”. You will then be prompted to choose a folder from within your script handler library. Choose the folder “Documents” if available. If not, create it.

TRY OUT YOUR AUTOMATION

Create a new script using the handler you just saved.

To run a script from the Script Menu, just click on its listing.

You can further organize your scripts by adding folders to any one or more of the folders accessed from this menu.

You may want to add your File InDesign Handler script to one; perhaps in a folder of your own named “Files-Folders” or maybe “Favorites”

Note: If you double-click on a script entry in the Script Menu, the script will open in Script Editor.

You may also want to add another folder or two to the Script Menu. Your Favorites folder might be a good place to place your favorite AddScriptTemplate script.

For practice, create a simple script handler such as a display dialog script to get a string response from the user. Using the ScriptLibTemplate template, create a Handler file for your handler. Once created, save the handler file to the desktop. Now run the File InDesign Handler script you saved in your folder for the Script Menu. When the script runs you will be asked to choose the handler file, and then the folder into which you want the handler saved. Once the script terminates, check to make sure the handler was saved in the folder designated. (From AppleScript Editor’s File menu choose New (Command + N). Control+Click in the editing window and select the handler from your InDesign CC Handlers folder. Double-check your handler to make sure it works as anticipated. Sit back and think of all the ways having script templates and script handlers easily accessible in convenient locations on your computer will save you hours when it comes to writing scripts.