Recently a user inquired if a script could be written to automate the process of exporting a document to PDF. If this was possible, the user inquired “where would I start.”

Blogs written on scripting most often assume that the reader knows the basics of writing a script. But this inquiry caused me to think that it might be a good idea to back-peddle a little and create a series of blogs targeted to the new beginner.

This discussion starts with AppleScript simply because I believe it is easier for the beginner to understand. If you are a Windows user, my apologies; you will have to wait for a series that talks about ExtendScript. 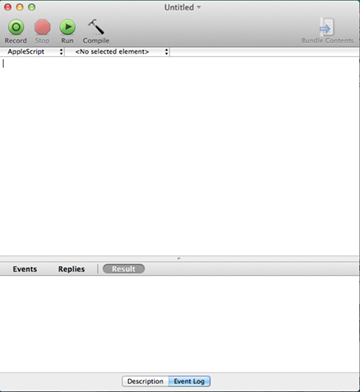 The editor is terribly easy to use, just start typing inside the large predominate panel. The instructions you write can be targeted to the Macintosh system as well as a wide variety of applications. Here we will focus on InDesign, version CC 2015. If you are using another version of InDesign, just change the name of the application in the following statement.

To target the application you want to automate with a script, you create a tell block that starts with the word tell, and ends with an end tell statement. Notice, in the above, the name of the application is placed between quotation marks. With a script you use straight quotes only; not printer’s (curly) quotes.

Instructions to the user, or notes to yourself, can be placed in a script using a comment. A single line comment follows two hyphens as in the example above. A comment that spans more than one line is placed inside of a parent-asterisk pair.

To automate InDesign using an AppleScript script you need to get familiar with its AppleScript Dictionary. From within the AppleScript Editor, choose File > Open Dictionary…. This will present you a list of the dictionaries for all of the scriptable applications installed on your machine. 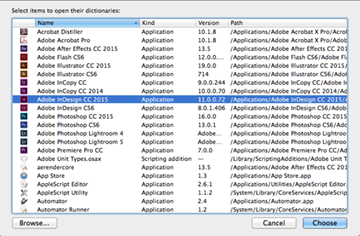 Choose the entry for your version of InDesign and click Choose.

Entries in the AppleScript Dictionary describe the scriptable objects that make up the application. Each object can have properties and methods.

In the find field (magnifier) type the words PDF Export. A list of suggested items is presented from which select PDF export preference with kind of Class.

This takes you to the entry for the PDF export preferences where you can browse through all of the preferences (properties) that can be set for this object classification (class). 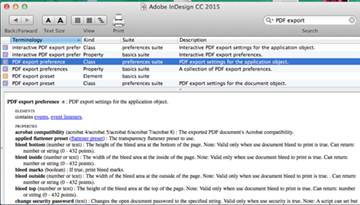 As you will see, the list of properties for PDF Export Preferences is quite extensive.Make note of the settings that you are interested in.

To see what the current values for a particular property are, use a get statement. For example one property you might be interested in is crop images to frames. This get statement can be written as follows:

To make sure you have written the statements correctly, click the Compile button at the top of the editor (hammer button). The code styling will change and no error will be posted if all is OK. If not, the error message should give you a clue of where you have made the error. Check for misspellings or curly quotes instead of straight. When the code compiles, click the <strongrun<>button to run the script. The value returned for the get statement will be displayed in the editor’s Result panel. (Make sure the Result button is highlighted). If you look at the entry for crop images to frames in the dictionary, you will see that the result will be boolean. A boolean is either true or false.</strongrun<> 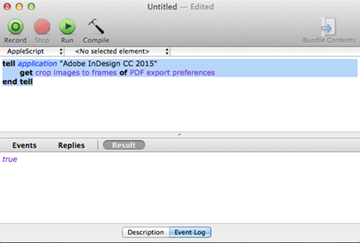 Script with result in Result panel

If you want to make sure that crop images to frames is always set to true, you can set this property using the following set statement.

Before you decide that you need to define the whole whopping list of settings for your automated PDF export, you may wish to look at the PDF export presets provided by InDesign. To get a list of existing presets, you can use the following:

One way to get a quick overview of the settings established for a preset would be to open the Export Adobe PDF export window in InDesign (File > Export). With a document open, choose File > Export and Choose Adobe PDF (Print) in the chooser. Give the export a file location and click Save. (You can always Cancel before actually creating the PDF.) In the Export Adobe PDF window, choose a preset and browse through the dialog tab panels to see how the values are set. You may find that one of the presets has just about all of the settings defined the way you want them. 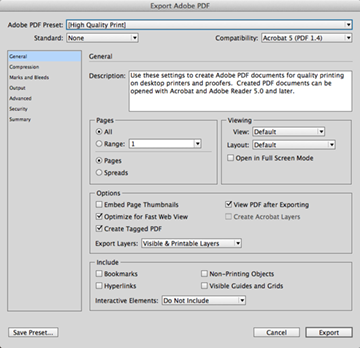 Alternatively, you could use a script similar to the following to get the values you are interested in:

This script introduces a couple of new concepts:

To get a sense of how this works, copy the script above into AppleScript Editor. Make sure you have your version of InDesign running in the background. Compile and then run the script. Check out the result in the editor’s Result panel. Add more statements to get all of the property values you are interested in.

If you find a PDF export preset that sets your PDF Export Preference values the way you want them, you can export a document to PDF using a script similar to the following:

Export to PDF With Preset

Note: asynchronous export is only available with later versions of InDesign. Consult the AppleScript Dictionary for your version of InDesign.

CREATE YOUR OWN PRESET

Notice that this script uses an if statement to determine if a preset currently exists with the name identified in the variable presetName. If the preset exists, its values are overwritten by those enumerated in the tell myPreset statement block. For a fully functional script you might want to alert the user that the preset values will be overwritten and give the user the option to not override the settings.

Note: When you export a document using a preset, any properties not set by the preset default to those currently set by default.

PDF export preferences that can’t be included in a PDF export preset are those that have to do with security. Security settings are only effective if the property use security is set to true:

For the most part, the preferences that can be set for PDF export are fairly self explanatory. One that may give you some difficulty is applied Flattener Preset. A Flattener Preset is similar to a PDF Export Preset as it is a collection of properties identified by a given name.

Adobe’s technology for turning a document having transparencies into a form that can be output is called flattening. For this, InDesign provides several flattener presets, a list of which can be returned using:

To use a flattener preset certain conditions must exist within the application. Without that, an attempt to set or get values having to do with a flattener or transparency will produce an error. For this reason you will want to place these statements inside a try, end try statement block.

With a number of PDF Export Presets created, you could present your user with a list of presets from which to choose as part of an export to PDF script. 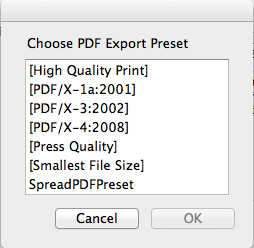 Dialog presented when Export to PDF script is run

We have covered a lot of territory here including using AppleScript control statements such as if/else and try/on error. To dig deeper into working with AppleScript and PDF export, avail yourself of a copy of Adobe’s InDesign Scripting Guide_AS (click here). Search for topics having to do with PDF Export. You will find a wealth of information there. The latest version to my knowledge is for InDesign CS 6, but for the most part is perfectly applicable with later versions.

As you can see from this last script example, a script can start to get pretty complex. In the next installation of this series we will explore ways you can make your script more readable and extendable as we add more to our example Export to PDF script above.