In our previous blog (July 21), we put a demonstration script together using AppleScript. This script allows the user to choose a PDF export preset from a list of presets. With the preset chosen, it exports the PDF to a fixed file path on the user’s desktop. This is OK for a demonstration script, but for a real world application, your script should either:

To save the exported PDF to the same folder as the document, you can use the document’s full name property. To see how this would work, enter the following into a new edit window for AppleScript Editor (File > New)

Notice that the value returned for the variable docPath is a file reference. Having a file reference, we can use the Finder to return the parent folder (container) for the document. But first we must change the file reference to an alias reference. Add the following to your test script above:

Notice that here we change the value returned from the Finder from a folder reference to a string (text). This is so we can add the name of our PDF export file to its folder path.

To add this bit of code to our previous script would make it even more cumbersome. Instead, lets revisit our original script and break it down into pieces of code that are more easily managed, more robust, and reusable.

The first thing we had our previous script do was to check to make sure there was a document open. If there is more than 1 document, we have it place the top-most document into a variable docRef. This is something a great number of your scripts may need to do. Similarly, we can see that other functionality included in the script could possibly be found in other scripts. Let’s put each of the major functions of our script into a piece of code that, once called, can run all by itself. In AppleScript, this is referred to as a handler; in other languages it is called a function.

You might want to think of a handler (or function) as a subcontractor: Someone who is specialized to perform a specific job as part of a larger project. This contractor could be a plumber or electrician when it comes to building a house. When you want a particular part of a project to be done, you call the subcontractor and send him the specifications for the job. This is similar to how handlers work in AppleScript. From the main section of the script you call a handler to do its job and pass it specifications (parameters) for completing the task.

A handler begins with the word on or to. We will use the word on. It also ends with a parentheses pair.

Get Reference to Document

To run the handler, the AppleScript script refers to it by name. Place the following at the top of your new script:

If, no active document is open, the handler will generate an error. Notice the nested if statement that also checks to make sure the document has been saved. To alert our user to a problem, we need to provide some way to catch the error so we can give the user the message and exit gracefully from the script. We can do this with a try/on error statement block. As part of the block, a display alert statement is used to give the user the error message after which it exits using the return statement. Change the top of your new script to read as follows:

The next thing our original script did was to get a list of PDF export preset names and have the user choose the one to use by name. If the user does not choose an item from the list, the script needs to alert the user that the script cannot continue without a valid PDF preset. The process of choosing a PDF Export preset from a list is something that can find its way into any number of scripts. Again, let’s put this process into another handler, called ChoosePDFPreset. Copy and paste the following below the getDocRef handler.

Because this handler can also generate an error, we can place its call inside our try/on error statement block. Place this directly below the line that calls getDocRef()

Path for Saving the PDF Export

To place the exported PDF into the same folder as the document, we need to get the path to its parent folder. Again, this is another process that could be used in any number of other scripts. Let’s write this up as another handler getSavePath. For this, we will need a reference to the document. We can pass this information to our handler by placing the variable docRef inside the parentheses provided as part of the handler call. Similarly, the parentheses that is part of the handler will receive the value. You might want to think of the parentheses for the handler in the call and in the handler as in and out baskets. We put the information needed in the out basket for the call which is then received by the in basket for the handler.

For the handler, we need to add the name of the document to the path to its folder (the parent of its full name path)

Even though this handler should not generate an error, we can place its call inside the try/on error statement block just to be sure. Place the following directly below the call to choosePDFPreset().

The only thing left is to actually export the document. We can do this directly below the call to getSavePath(docRef). But before you do this, run the script as it is to make sure that the value for savePath is as expected. To do this, place the variable savePath at the end of the script. If the value that shows in the Result panel for Script Editor is as expected, add the following code to export the document as PDF to this path.

To add security settings to our ExportPDF_Preset script, we can add the following handler. This handler wil be effective only if all security settings, with exception of use security and security password, will be set uniformly–all will be either true or false.

The call to the doSecurity handler will require a value for the proposed document password and a boolean (true or false) for use in setting the security settings. For a more usable script, these values will need to be provided by the user as part of a custom dialog. For demonstration, we will hard-code this at the top of the script.

Then inside the try/on error statement block, add the following after the set savePath statement:

It would also be a good idea to reset the security settings back to their defaults when the script is completed. For this, set the password to an empty string (“”) and all other values to false (assuming that the defaults for these values are all set to false).

InDesign has its own way for placing a watermark on a document. This is a document preference: watermark preference. The properties for this preference are self explanatory with perhaps the value for the font color. Instead of using a swatch found in the document, a list of RGB values, or one of the system colors is used. The system colors are listed in the AppleScript dictionary for InDesign which include among others red, green, gold, dark blue, and white.

In the minimum, the handler for creating a watermark will require a reference to the document and the values for the watermark visibility, printing, text, font size, color, and opacity. The values for text, font, size, color, and opacity could be hard-wired to the script if the values would never change (which is unlikely). Better, these should be returned as the result of user choices in a custom dialog box. For simplicity sake, however, our values will be hard wired at the top of our demonstration script.

Then inside the try/on error statement block, after the doSecurity statement, add:

At the bottom of the script, add the handler for doWatermark

Remember that these values are preferences for the document and will remain as set until set otherwise. To export your document as PDF without the watermark you will need to set the values for watermark text to an empty string (“”) with watermark visibility and watermark do print set to false.

The top of your script should now look similar to the following:

This will be followed by your handlers which can be in no particular order.

Put a sample document together in InDesign. Compile and then run your script from within the AppleScript editor. Hopefully, your script will compile and run without a hitch. Select a PDF Export Preset from the list presented and return. All the rest is done by the script. Below is our sample document (5 in by 7 in) as exported with the settings established in our sample script. 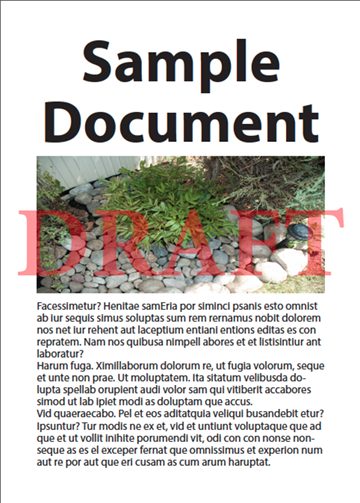 PDF of sample document with watermark

With the majority of a script’s functionality stored in handlers, the script becomes well organized and readable. More importantly, handlers provide the ability for reuse in any number of other scripts often with no more than a simple copy and paste. Start saving handlers that you think you may want to use in a folder as a library resource.