Take Some of the Work Out of Creating Custom Dialogs

If you have created scripts having a custom dialog you know that the code can be quite involved. For instance, having to create a row, then a column, and then a user interface element can take up a few lines of code to say the least. You can eliminate some of the code and redundancy by having a few coding tricks up your sleeve. In this discussion we will look at a few:

Nesting tell statements in this manner results in a savings of 2 lines of code and having to create 2 additional variables. The only time a variable is created is when an object reference is needed later in the code.

If you have a number of fields that are similar, use a repeat loop to create the fields. To reference the field later in the code, create either a name or object reference as part of its make statement. The following illustrates using a list to hold a reference to the text fields.

Writing just this much code will allow you to test and see how your interface will look before you start adding all of the rest.

In running the code above, if the result of the variable userResponse is true the values can be returned using a similar loop construct. Add the following in place of the last two statements in the code above, and test filling in the text fields, and clicking OK.

If you attempted to test the code above and got an error instead of a dialog, the problem may be that script preferences need to be set. To finish off the custom dialog you need to make sure the user interaction level for script preferences is set to interact with all. As with other application preferences, the good neighbor policy is to place values for existing preferences in a variable before changing, then restoring the original value when you are through.

After the tell application statement in the code above, add the following:

Then after the destroy dlgRef statement in the code above add:

The best way to handle the problem is to generate an error if the value of userResponse is not true and handle the error in a try/end try block.

For this you will need to test for the value of userResponse after destroying the dialog. Have the script throw an error if true, or return the dialog result if false.

After the set user interaction level statement at the bottom of the script, add the following:

Of course your script now needs to handle the error that is generated if the user cancels. To do this, you can place the custom dialog code in a handler and call the handler from within a try statement.

The script will now read as follows:

Test this out to make sure the script works as expected. 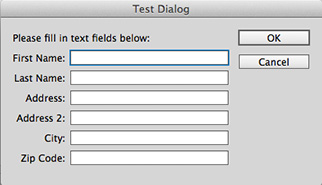 Once a dialog is created using the show command, it remains in memory until destroyed. While you have been working with your script, you may have left a few dialogs in memory along the way. To test for this you may want to use the following:

You may want to improve the appearance of your custom dialog by varying the widths of the text editboxes. This can be done easily by changing the fieldList to a list of lists where the first value in each of its lists is the title for the field, and the second is its width. You could even place default values in the fields by adding a third item to each list inside the fieldList. For dialog elements other than text fields (perhaps a drop down for choosing a State: code), these will need to be created outside of the text field loop.

In our next installation we will look at some AppleScript commands that you may want to incorporate to give even more usability to your custom dialog .