Do you have a script that you use often? Give it a keyboard shortcut to save yourself trips to InDesign’s Script’s panel.

Once you get a script working the way you want it, save it to one of InDesign’s folders designated specifically for scripts. Where is that? you may ask. Here’s the trick:

If you open the Script Panel in InDesign (Window > Utilities > Scripts) you will see that there are two main divisions: Application and User.

Inside the Application Folder there is a subfolder named Samples. (If you haven’t played with the scripts inside the Samples folder, you are missing out on some great time-saving scripts.)

If you haven’t saved a script to the user’s folder it will be empty.

You can place a script in either of the two locations. Let’s explore:

Only a person with administrative privileges can add a script to the Application folder in the Scripts panel.

Scripts in the User folder are open for use, read, and edit by the user who is currently logged into the computer. If you don’t have administrative privileges, or you simply don’t like having to type in your password just to make a simple change to a script, you may decide the User folder is the one for you.

PUT YOUR SCRIPT TO WORK

Now that you have decided on the folder for your script, let’s put it to work with a keyboard shortcut. The steps for this will be as follows:

ADD SCRIPT TO THE FOLDER

When you Control_Click (Right-Click) on either the Application or User folder inside the Script panel listing. you get a popup with only one option: Reveal in Finder

Click on the option to open the Finder’s choose window. The Scripts Panel will be selected. If in Columnar view you can see the folder path that leads to the Script folder you selected. The path to the Application is easy to trace.

Double-click on the highlighted Scripts Panel folder to open its list. Drag your script into the list. That’s it. Now you can double-click on its entry from inside InDesign to take advantage of all that hard work creating the script .

Rather than launching the script from InDesign’s Script panel, use a keyboard shortcut.

The Keyboard Shortcut dialog is opened from InDesign’s Edit menu. 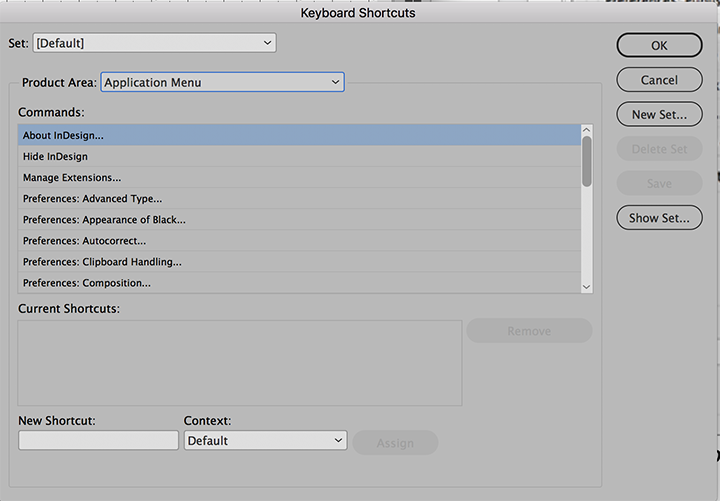 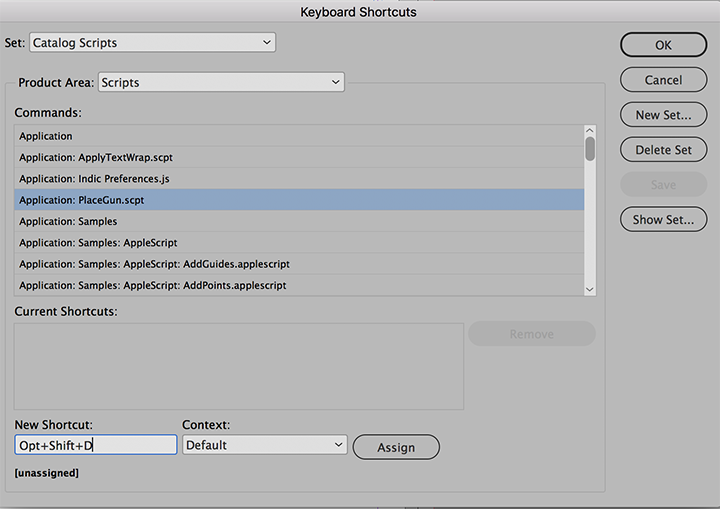 Back in InDesign, if you reopen the Scripts panel, you should see the keyboard shortcut you have assigned to the script as part of its listing.

Now that you have assigned a shortcut to the script, try it out. Make sure InDesign is frontmost. In the active document select a page item or items as needed for the script, and enter the keyboard shortcut. Pat yourself on the back thinking of all the time this little keyboard shortcut and script will save you.

In the next blog post we will look at building custom dialogs, along with an example script to make working in InDesign even more automated.

Scripts are provided for demonstration and educational purposes. No representation is made to their accuracy or completeness. Readers are advised to use the scripts at their own discretion.