Our Feature Script for the month of July involves creating page destination hyperlinks for terms on Glossary pages. Part of the process for setting up the Glossary pages however requires a little work. There needs to be some way to identify the glossary terms from their descriptions. For the most part, the glossary term is the first word of each paragraph in the Glossary text flow. But in some instances the term can be comprised of two or more words. To get a list of the terms for the purpose of creating text hyperlinks automatically, a script can be used if the terms are assigned a unique character style. Of course, you could always manually select the text and apply the style. That is OK if the glossary list is short, but if not, there are better solutions:

Define the Glossary term as part of text entry.

For simplicity, this demonstration will use the second option and have the user enter a special character between the glossary term and its definition. The special character used will be different depending on the method used for applying the style.

The following demonstration script assumes the special character used is an underscore (_), the paragraph style to use is “Glossary” and the character style to apply to the glossary terms is “GlossaryBold.” As part of the process, the script will change the underscore to a nonbreakingspace.

To test the script, copy the code to AppleScript Editor. Select the text in the document to be styled and run the script from the editor.

To make this a more usable script, you will want to add a custom dialog from which the user can select the styles for styling the text and determine the characters for the find and replace (findChar, replaceChar).

A better solution might be to simply create a nested paragraph style and apply the style to all of the Glossary text. For this purpose, the special character could be a fixed white space character (Type > Insert White Space) or the End Nested Style Character (Type > Insert Special Character > Other). The special character used for this example was the nonbreaking space character simply because it has an easy-to-remember keyboard shortcut (command + option + x). The nested style dialog for our sample nested paragraph style is shown in the screen capture below. 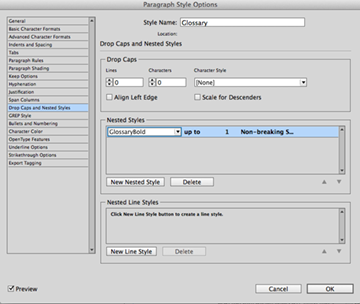 Assuming that the Glossary text is in a series of linked text frames, a list of the glossary terms to use for creating text hyperlinks can be created easily using a script. For this, a simple find text can be used. Because our sample HyperGlossary script creates page destination hyperlinks, its getGlossaryTerms handler (shown below) requires a reference to the text frame, the find string, the character style used for styling the terms, and a boolean to indicate if the list found should be reversed.

The handler is called from within a repeat loop that iterates through the list of terms. The entire script HyperGlossaryWDlg can be downloaded from our Feature page for this month.

Take advantage of the download (there is a version for AppleScript as well as Extenscript). Go through one of the scripts to understand how it was put together. The structure of the script is almost identical for both versions of the script. You may discover some handy routines in the process, and better, refine the script to make it your own.